A thunder storm came through the campground in Laughlin, Nevada and this is what it left behind...pretty neat! Looking to the back of our rig, we seen the rainbow and then to the front of our rig we noticed these colorful skies.

Another Windy Night Ahead

Thank God we were in the Nevada desert or we might have been concerned. Traveling into all the different States also include very different weather and the only time that we are not that concerned at all is when we are in Arizona or Nevada. Tornadoes, earthquakes and hurricanes never happen, even the Monsoons do not compare to the terrible storms in the Midwest.

Throughout the night and into the next day, the wind just howled and gusted to 50 mph. There were several times that we heard some sort of item whizzing by our rig and just hoped whatever it was that it did not hit us…nothing did. It was so windy, even with our stabilizers down and set, the motion was the same as if we were on a boat in rocky waters.

That Northern wind change things so drastically, one day in shorts and the next we couldn’t put enough close on to keep warm. Now again tomorrow they are finally calling for the wind to stop and temperatures to once again rise. Looking forward to a nice, warm and sunny day.
No comments:

The Most Strangest Thing Happened Today! 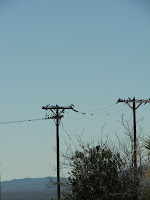 We were having lunch in our rig at the RV Park in Mohave Valley, Arizona that we are staying at. It was a beautiful sunny day and we had our door open when all of the sudden a huge shadow covered over the rig along with a strange fluttering noise. All of the sudden, there were birds everywhere, some even clinging to our screen door. It took a few moments before we realized what had happened…

A flock of birds had dive bombed our rig…leaving a total mess behind. Our neighbor seen it all, she even stated that she had never seen anything like it before, we agreed it was a first for us as well. We immediately went out and had to wash our rig and Jeep, it was a mess. 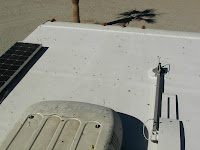 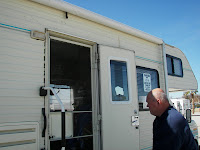 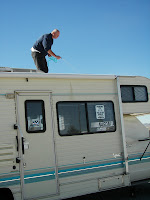 We have been looking for signs for what to do next…this definitely was a sign…but what could this one actually be telling us? We are open to hear your ideas!
No comments: 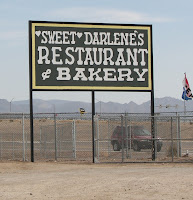 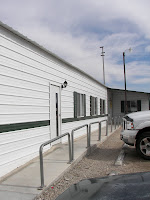 They claim to be the friendliest…not at all what we noticed!

We walked through the door at the same time as another couple did and we were never acknowledged, we got the idea we should seat ourselves, so we did. We sat for quite awhile without getting anybody’s attention and noticed the other couple had not received any service yet either, a group of four came in and were immediately noticed, given menus and silverware…we still waited. After awhile with even me acting like a fool and waving my arms…nothing. Finally the other couple got up and left. Jerry went up to the cashier and explained we had been waiting for awhile and asked for menus and some service. I heard a remark by somewhere along the lines that we had not been waiting too long.

Immediately a server brought us menus, she was very defensive and continued to make remarks defending herself even after we explained to her that it was alright. The attitude continued for the rest of our visit even though we tried to lighten things up. We began to notice throughout our visit that everybody else that came in had the same sort of experience…ignored. When customers came in looking lost standing at the door, the cashier continued to look the other way and several servers passed them by without even acknowledging them. It was not very busy at the time and the servers were not gathering and talking, they seemed to be busy cleaning tables and filling condiments without looking around.

It was a cute place and with the décor it seemed they were attempting to make it out as a family style restaurant…using paper cups and plates…a barn type building that they had long tables and plastic outdoor patio type chairs. The food was not good at all, it was like eating in a cafeteria…not flavorful and not presented very well. Whatever they were trying to accomplish, they were not successful and we would not recommend, nor would we ever return.
No comments:

I read an article today written by Sunny Schlenger, a writer and the founder of SunCoach. 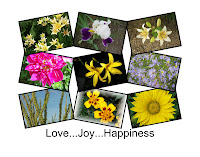 She always has some enlightening words to share and one of the things she shared this time was a new trend that we are excited to be a part of. This trend is passing around encouraging words to everyone...one person at a time. We will participate by adding a topic of "Encouraging Words" to our blog and sharing some of our favorite words from other writers and writing some of our own.


"Nothing ever gets done unless you make the time to do it."

Sunny Schlenger wrote this in her latest article that has lit a fire under me to begin making time to do this at least once a week. If you want to read her entire article, click on the title to this blog and it will link you to her site.

If these words have encouraged you in any way...please let us know and then please do the same for someone else...let's make this an epidemic.
No comments: 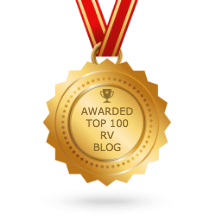 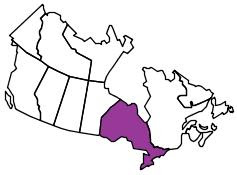